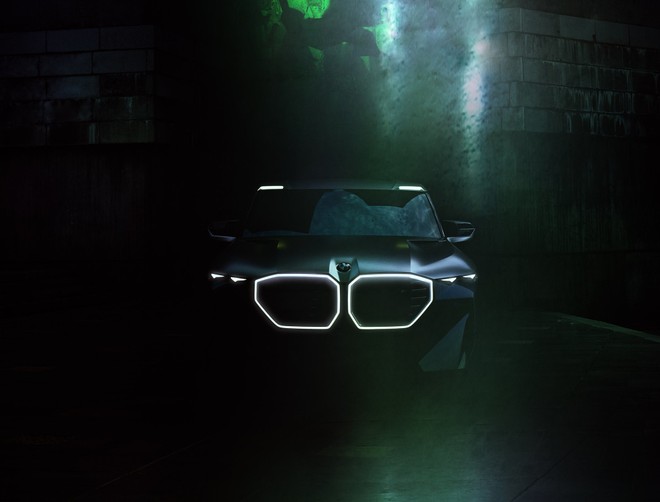 After much speculation, now comes the certainty. The first BMW hybrid SUV developed by the division M will be called BMW XM . Previously, in fact, some rumors claimed that this model could have been called BMW X8 M. Through its social accounts, the German manufacturer has released a first teaser of the car , also specifying what the official name will be. The high-performance SUV will be shown to the public during the Art Basel event which will take place in Miami from 2 to 4 December (the official presentation should take place, instead, on 29 November).

It will be treated anyway still of a concept car , even if very close to the production version.

The teaser shared by German manufacturer gives a first look at the design of the front that BMW has developed for its new model. Particularly striking is the double kidney which has generous dimensions even if it does not reach those of the BMW M3. A wide debate has opened up among customers and supporters of this brand on the shape and size of this particular German car, and there is no shortage of criticism from the car manufacturer for the choice of offering an extra-sized kidney grille on some models. large.

We will see if this solution with horizontal development will please you more . Double kidney which, in this case, seems to have an illuminated outline. In addition, the LED headlights with a very slim design stand out. To understand a little better what this SUV will look like, you can refer to past spy photos. Looking at the shots, it was possible to notice that the SUV will have an arched roofline that will allow to make its look a little more dynamic despite its generous dimensions.

The main curiosity, however, is what we will find under the hood. We already know that there will be a Plug-in hybrid powertrain . However, there are still no precise details. At the moment we are talking about a twin-turbo V8 combined with an electric unit for a total power of 552 kW / 750 CV. There will also be all-wheel drive.

Fortunately, you won’t have to wait long to discover all the secrets of this high-performance hybrid SUV.

USA and Europe: shared agenda on space and cybersecurity issues