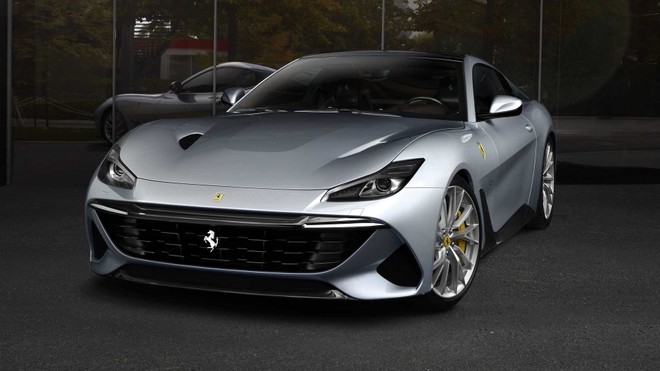 All Ferraris are special but the new BR 20 has something more. This is a one-off model , i.e. a car that will be produced in a single example for the lucky and wealthy customer who ordered it. The price of this exclusive supercar has not been disclosed. A choice that is not surprising given that Maranello does not usually share too many details about these unique models.

INSPIRED BY THE PAST

For the BR 20, Ferrari used the base of the GTC4Lusso. To carry out its design, the Prancing Horse technicians were inspired by the Ferraris of the years 50 And ’60 including the 410 SA and 500 Superfast. The design team led by Flavio Manzoni, to create a car that had similar proportions to the cars of the past, equipped the BR 20 of a fastback line.

Always for the same purpose, this exclusive on-off has been made about 7 cm longer than the car from which it derives. In particular, the back has been lengthened to accentuate the fastback line . In front we find a large grille with an upper element in carbon fiber. To underline the dynamic character of the front, the presence of chromed side inserts.

Compared to the GTC4Lusso, the design team has revised the design of the headlights to make the hood appear longer and more elegant. At the rear, the carbon fiber diffuser integrates the new tailpipes which have been specially revised for this exclusive model. The rear double tailpipes have been designed to resume the shapes of the tailpipes. There are also many details in carbon fiber. This exclusive supercar also sports specific inch tone-on alloy wheels. tone with diamond finish.

The technicians have actively involved the lucky customer to the design of this car. The client was also able to collaborate on the definition of the interiors. Speaking of the interior, we find a lot of luxury with two-tone brown leather and carbon fiber finishes. For example, the seats are upholstered in Dark Brown Heritage Leather in dark brown and feature a unique pattern on the front and silver cross stitching.

Thanks to the removal of the two rear seats, the passenger compartment gains space to offer people a greater feeling of airiness. And the mechanics? Ferrari did not want to say anything about it. However, we can hazard a guess. Since this exclusive one-off is based on the GTC4Lusso, the engine should always be the V 12 of 6.3 liters capable of delivering 507 kW (690 CV) with 697 Nm of torque . The performance, therefore, should be very similar to that of the car from which it derives: maximum speed of 335 km / h and 0 – 100 km / h in 3.4 seconds. Traction is all-wheel drive.

Google Pixel 6, the last word on the lack of face unlock has not yet been said

China, a polygon in the desert: the targets are copies of US ships and aircraft carriers

These layered Martian rocks are intriguing the Perseverance rover

WindTre gives unlimited Giga next weekend: how it works