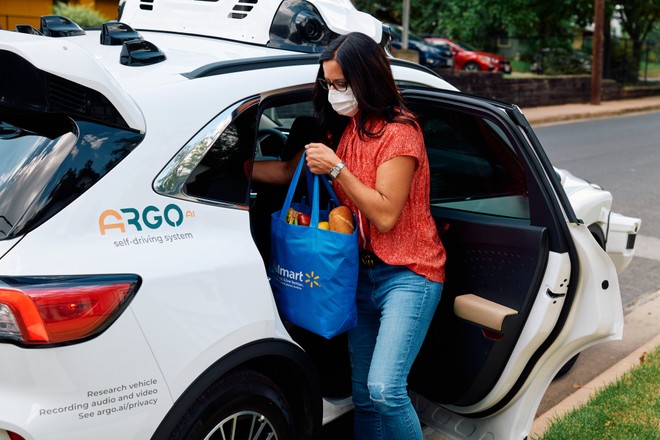 Ford announced that together at Walmart and Argo AI will launch a delivery service based on self-driving cars in Miami, Austin, Texas and Washington DC. The first tests are expected by the end of the year. More specifically, it will be a service for last mile deliveries of products purchased from Walmart which will obviously use Ford vehicles equipped with the autonomous driving technology developed by Argo AI.

The service will allow customers to place online orders for groceries and other sundries through Walmart’s online platform. Argo AI’s cloud-based infrastructure will be integrated with Walmart’s, routing orders and scheduling delivery of purchases to customers’ homes. Initially, deliveries will take place in specific areas of the cities but the goal is to progressively expand service.

The project aims to show the potential of delivery services through autonomous vehicles on a large scale in a market, that of online purchases, where customer expectations are increasing as they ask for fast deliveries. Logistics, therefore, is becoming an increasingly important aspect.

Just Walmart is carrying out several projects related to self-driving deliveries. For example, last April he announced an investment in Cruise. The multinational with Cruise had previously announced in 2020 a pilot project of home delivery based on self-driving vehicles in Scottsdale, Arizona.

This new project will also allow Argo AI to further experiment with Ford its autonomous driving platform in view of more ambitious goals . In fact, the two companies announced in July that they wanted to bring up to 1 on the road. 000 self-driving vehicles within 5 years within Lyft’s network to be used to offer ride-hailing services. We will depart from Miami.

Google Pixel 6 Pro with variable refresh display, Fold by the end of the year | Rumor

Xiaomi, in 2024 its first electric could arrive