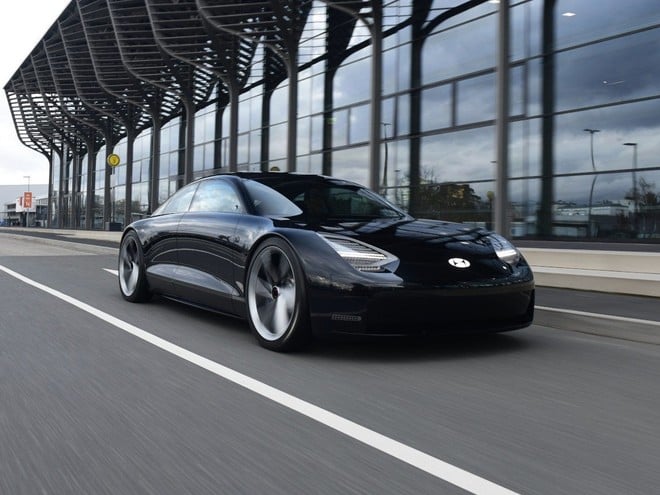 Hyundai has an ambitious electrification strategy and will launch several new electric models in the coming years. Some of these will be based on the E-GMP platform on which the IONIQ 5 was born that we have had the opportunity to test and which brought us to the Monaco Salon 2021. Towards the end of 2022, the mark will bear debuting the IONIQ 6 , a battery-powered sedan whose design will be inspired by that of the Prophecy concept car presented last year.

Just this model has been intercepted on German roads during some tests. The new spy photos show a vehicle obviously still camouflaged but it is still possible to evaluate some first aspects of the design, especially by a comparison with that of the concept car.

The images show a car with a more traditional design . Not surprising, however, since the concepts always have extreme lines. The front appears shorter. In addition, there are conventional side mirrors and not the digital ones of the concept car (nevertheless seen in the past on some prototypes). The alloy wheels appear smaller in size and are characterized by having an aerodynamic design. The model in the spy photos also appears to have traditional door handles and a less extreme roofline, probably to maximize the headroom of the passengers who will sit in the back.

The rear is particularly camouflaged, however, the light clusters and a small spoiler can be seen. The new images do not show the interior. In any case, you will have to expect the presence of as much technology as on the IONIQ 5 where there are large displays for instrumentation and infotainment .

Regarding the engines there should be no particular surprises. The IONIQ 6 should offer the same powertrains as the IONIQ 5. Therefore, it will be offered with both a single electric motor from 160 kW and both with two units of 225 kW overall. Given that Hyundai is pursuing the development of the IONIQ 5 N, it cannot be excluded a priori that at a later time the IONIQ 6 may also be marketed in a sports variant.

All that remains is to wait for more information on the development of this electric sedan.

Apple iPad Mini 2021 review: small is beautiful, but who is it really for?