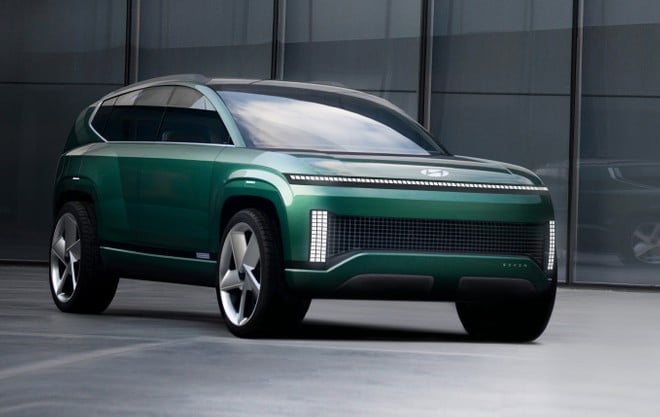 Hyundai Seven Concept has been officially unveiled at the Los Angeles Auto Show. This is a very important concept as it anticipates the shapes of the IONIQ 7, an electric SUV that will debut during the 2024. For this prototype, the designers have revised the layout of the passenger compartment to make the most of the advantages of having a dedicated platform , offering a different environment than usual. In addition, Seven makes extensive use of sustainable materials .

The Seven concept rests on the well-known E-GMP platform, the same on which IONIQ 5 is realized. It is a platform expressly designed for electric cars only. This allows Korean technicians to have more freedom in designing new models. In the case of this new concept, the long wheelbase , the roof line and the front detail, have made it possible to obtain a look different from that of classic SUVs.

Overall, the concept features a muscular design. The front and rear are characterized by optical groups composed of square pixels. This is a solution that Hyundai calls Parametric Pixel and that we will probably also find on other future models of the Korean manufacturer’s electric range .

Special feature, the wheels are equipped with integrated Active Air Flaps, which open or retract depending on the need for brake cooling or reduction of the aerodynamic drag.

The interiors are very interesting. Thanks at the 3.2 meter wheelbase , the SUV can offer a lot of space on board. The flat floor allowed Hyundai to imagine an alternative environment to the classic one and which reflects the Korean manufacturer’s future vision on autonomous driving. The concept features a distinctive door opening. The rear one opens up into the wind, a bit like on the BMW i3. This choice, combined with the size of the car, offers the occupants a very wide entrance.

The seating arrangement is different from that of traditional SUVs, with swivel seats and a bench . This arrangement can be customized depending on the driving mode used (the driver seat controller disappears in autonomous driving mode) . The passenger compartment can thus be transformed into a real mini living room where people can relax and pass the time during the journey with maximum comfort, also taking advantage of a mini fridge. Of course, there is no lack of technology. For example, the panoramic roof not only displays various contents according to the tastes of the passengers, but also changes the overall interior atmosphere to ensure maximum relaxation during the journey.

As mentioned at the beginning, Seven uses sustainable and recycled materials. In addition, it has a sophisticated system to purify the air.

The Seven concept uses a system that Hyundai calls Hygiene Airflow System. Thanks to a particular management of air flows, inspired by that present in airplanes, this system allows to reduce contamination among passengers. A solution that works both when the car is moving and when the vehicle is stationary. Furthermore, the sanitation through ultraviolet rays is activated, to eliminate viruses and bacteria, every time all passengers get off.

Hyundai did not want to go into details regarding the technical specifications of the concept. According to the Korean brand, the goal is to offer autonomy capable of reaching 300 miles, i.e. approximately 482 km. Thanks to the E-GMP platform that supports the architecture a 800 V, it will be possible to recharge to high power to pass in 20 minutes from 10% all ‘80% of capacity.

Crew-2 crew aboard ISS aboard Crew Dragon | Live in progress