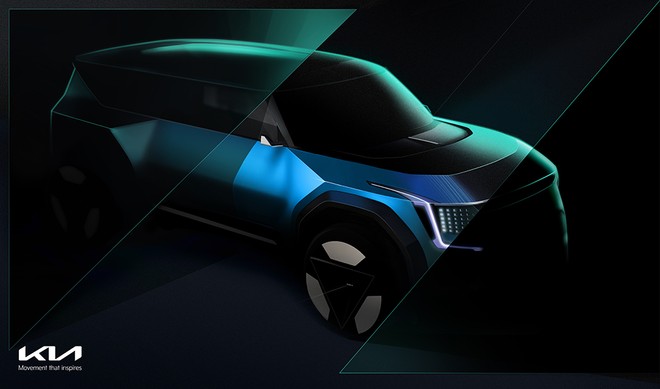 Kia Concept EV9, as promised, is shown in some art concept before dropping the veils completely on 17 November at AutoMobility in Los Angeles. Why a concept? Because in Kia they want to exploit the new “concept” of electric SUV as a real manifesto of the next and future sustainable mobility .

More and more often the car manufacturers present us with new four-wheelers that are not just mere means of transport but extremely smart and versatile lounge spaces , where the driver can “stay” and consider the car as a real extension of the residence.

The first official images of the Concept show an SUV with a future-oriented aesthetics . The shapes are minimal and linear. The presence on the street is guaranteed, as is the large living space inside.

And the cockpit ? Also innovative in design, designed to offer the driver and passengers a remarkable generous and chameleonic interior space, designed to adapt in its configuration to the progress of the journey and to the needs of the passengers.

Obviously the technological part is essential. Here, then, is a ultra-wide interactive display , in a floating position, and a radical reinterpretation of the traditional steering wheel that now resembles a yoke with a minimal crown and more contained in size.

We just have to wait for the new Kia Concept EV9 to AutoMobility LA, starting next week, to discover the House’s new electric SUV “concept”.

Skoda ENYAQ iV, fast charging as standard across the range

Rivian opens orders for its electric vans. But wasn't that an Amazon exclusive?

Disney + has over 118 million subscribers