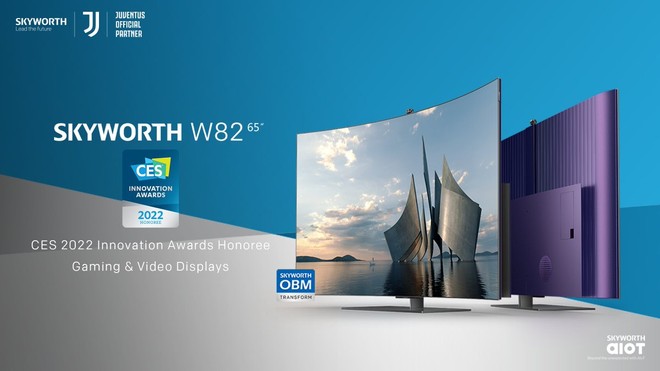 The Skyworth W television 82 received two awards CES 2022 Innovation Awards Honoree in the “Gaming” and “Video Displays” categories. This type of recognition is awarded every year to products characterized by particularly avant-garde design or engineering solutions. Skyworth is a Chinese brand active in the production of TVs: it is present in the domestic market, in the North American one and also in the European one, above all through the subsidiary Metz, which has various LCD and OLED models in its catalog.

The particularity of the W 82, the one that earned him the award from the judges, consists in the possibility of vary the curvature of the screen . Skyworth defines it as a “ transformable OLED TV” . The project is based on the OLED Basic Module ( OBM ) Transform Technology . An OBM is a basic module provided by LG Display – it comprises nothing more than the bare, raw panel and its control board. All the rest, from the front substrate to the back, what in the jargon is called “back cover”, is made by those who adhere to the OBM program, of which Skyworth is one of the longest-standing partners.

Skyworth’s customization led to the creation of an OLED TV that can switch from flat to curved and vice versa . This transformation, as the manufacturer defines it, is controlled by a motorized mechanism which varies the curvature on various levels:

To switch from u one setting to the other just press a button on the remote control. The use of the OBM module allowed Skyworth to design all the components necessary to use the motorized mechanism. On the front there is a substrate called 4K OLED Flexible Glass. The back is instead composed of 37 telescopic elements in the shape of fish scales, a solution designed to allow the screen to move freely.

The frames have been reduced until they are almost invisible: the screen occupies the 99, 22% of the front side. On the upper side there is a video camera from 12 MP swiveling (on 3 axes) with face recognition technology TrensAI Eye . The voices are instead captured by “far-field” microphones (also useful for interacting with voice assistants) and are processed through TrensAI Voice .

Signal processing is entrusted to the AI Picture Quality Engine . The areas of intervention are numerous and include the reproduction of colors, the increase of detail, the optimization based on the recognition of the scenes represented on the screen, the compensation of the motion through the technology 120 FPS Motion Estimation Motion Compensation (MEMC) and HDR Boost.

Skyworth declares a high chromatic fidelity: the DeltaE, the deviation from the reference , is contained at 0, 82, well below the critical threshold of 3. For more advanced users there is the possibility to take advantage of 1D LUT, 3D LUT and white balance at 20 points. We remind you that LUT is the abbreviation for Look-Up Table is the system with which the video industry ensures the maximum fidelity of the images.

W 82 is compatible with HDR in HDR 10 and Dolby Vision . The audio section consists of a 2.1-channel system with integrated subwoofer on the back, support for the Dolby Atmos and an overall power of 40 W. The platform Smart TV is based on the COOCAA 8.0 operating system and is managed by a SoC MediaTek S 900 , equipped with a quad-core CPU based on ARM Cortex-A architecture 73, a Mali G GPU 52 MC2, 8.5GB DDR4 RAM and 128 GB of integrated memory.

The TV provides two inputs HDMI 2.1 (here our guide explaining all the news) and an HDMI 2.0 input. On the most advanced ports you can carry Ultra HD signals at 120 Hz and provide the functions Auto Low Latency Mode ( ALLM ) and Variable Refresh Rate ( VRR ). In game mode the input lag, the delay in responding to commands, is 10 ms. Complete the equipment to connectivity Wi-Fi 6 .

Unlike other screens with variable curvature announced or previously shown (such as LG’s gaming OLED brought to CES 2021), W 82 is a product actually intended for sale and not a prototype: the Chinese price list is set at 29. 999 yuan , approximately 4. 100 EUR. A first contact with the transformable OLED, for Western users, is planned at CES 2022 in Las Vegas, which will take place from 5th to 8th January.

Tesla, the Supercharger network continues to grow: 30 thousand stalls around the world