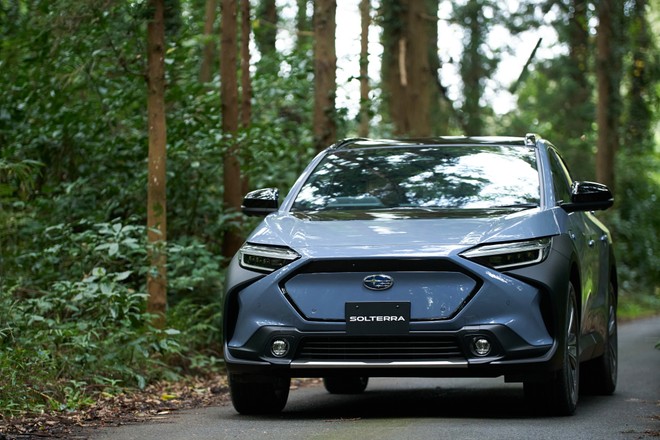 Subaru officially unveiled Solterra, its first electric SUV. It is a vehicle born from the collaboration with Toyota . Indeed, it has several elements in common with the new Toyota bZ4X unveiled at the end of October. The first battery-powered model from Subaru will be marketed by the middle of 2022 in various markets including Japan, United States, Canada, Europe and China. It will also be sold in Italy. The price list has obviously not yet been communicated.

Let’s see, now, the first details that the Japanese car manufacturer has shared.

The new Solterra electric SUV size 4. 690 mm length × 1. 860 mm width × 1. 650 mm height, with a step of 2. 850 mm. This vehicle obviously rests on the same platform as the Toyota bZ4X which has been renamed Subaru Global Platform. It is a platform developed specifically for electric cars only. From a design point of view, the similarities with the Toyota model are evident.

Le major differences are found at the level of the front which allows to make the Subaru model immediately identifiable. In particular, there is a more elaborate bumper, a different grille and optical groups with a different design. Alloy wheels can be from 18 or 20 inches.

The interior is very similar to that of the Toyota SUV . We find the digital instrumentation located above the steering wheel in an advanced position and the large infotainment screen located centrally. Space on board is certainly not lacking thanks to the wide wheelbase available to the SUV.

Few news on the powertrain front given the relationship with the Toyota electric SUV. Subaru has announced that Solterra will be available with a double electric motor that will also allow it to have four-wheel drive. We find two units of 80 kW for a total power of 160 kW with with 336 Nm of torque . The services have not been communicated. However, the Toyota model with this engine is able to reach a maximum speed of 160 km / h and accelerate from 0 to 100 km / h in 7.7 seconds.

To power the powertrain a 18, 4 kWh which can be recharged in direct current up to a power of 150 kW and up to 6.6 kW in alternating current. The autonomy, according to the Japanese WLTC cycle, reaches up to 460 km . Like other Subaru SUV models, the Solterra is equipped with the AWD X-MODE control system which improves the sense of safety on rough roads. By adding the new Grip Control function, which allows the vehicle to run at a constant speed and stabilizes it even on rough roads, the off-road capability has been further improved.

There should also be several driving assistance solutions to make journeys safer. Certainly, more details of the Solterra will be communicated as its commercialization approaches.

Facial recognition in the West Bank: Big Brother's eyes on the Palestinians