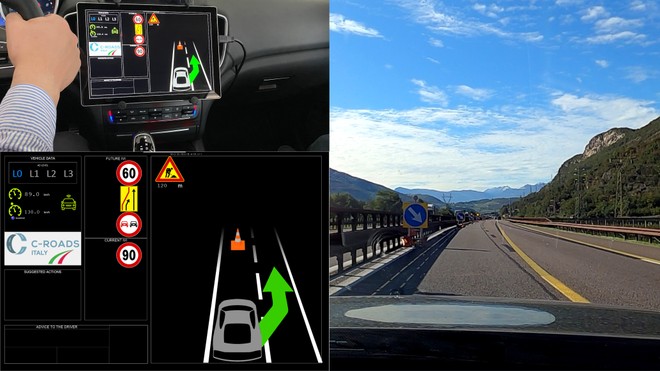 Several realities are working on the development of their guide solutions autonomous . This work, however, does not focus only on cars but also on road infrastructure which when it will be able to communicate constantly with the cars it will be able to provide valuable information to make the journeys made with self-driving vehicles safer. In this sense comes the news that the first results achieved by the project C-Roads Italy have been presented ), co-financed by the European Union which was carried out by the Italian Ministry of Infrastructure and Transport jointly with some partners including the research center of the Stellantis Group and Autostrada del Brennero.

The initiative, which is part of a larger European project, aims to carry on the development and testing of “smart roads” with the implementation of harmonized Cooperative Intelligent Transport Systems (C-ITS) and interoperable enabling communication between vehicles and with the road infrastructure across Europe. It is a communication system also known as Vehicle-to-Everything (V2X) .

The C-Roads Italy initiative guarantees the continuity of cooperative services between member states and road operators, contributing to a sustainable transport system in terms of economic, environmental and social impact and, at the same time, improving road safety, increasing the efficiency of the use of road infrastructure and traffic management, improve the interoperability of transport services for both passengers and freight.

The tests have not yet finished and are being conducted at the Stellantis research center in Trento, on the motorway sections of A 22 near Trento, on the Venice ring road, on sections of the A4 and A 28, as well as at the Brenner for cross-border scenarios between Italy and Austria. For the occasion, prototypes of Maserati Ghibli and Fiat were set up 500 X equipped with an advanced system for the management of connected and autonomous vehicles called “Highway Chauffeur”. These are solutions that allow you to enable level 3 autonomous driving . (Here we explain the different levels of autonomous driving).

The main objective of the Stellantis research center is to test, verify and demonstrate how the Vehicle to Vehicle (V2V) and Vehicle to Infrastructure (V2I) can have a positive impact on safety, traffic fluidity and the environment. The focus is on V2I communication, i.e. between the vehicles and the intelligent road network so that the Highway Chauffeur can exploit the information coming from the outside to improve the knowledge of the scenario in which it moves, for safe and comfortable autonomous driving ( traffic, accidents, construction sites and more).

Information that will also be made available to the driver during manual driving through alerts and suggestions. V2X messages are geo-referenced, so that the vehicle can filter the content based on its position and trajectory.

The prototypes that are being tested on the road receive traffic information not only from the road infrastructure but also from other vehicles equipped with the same technology that will signal their presence and any problems. The cars used for the tests were tested in a series of use cases, ranging “ from reporting unexpected road events , to the cooperative scenarios between passenger cars, to the more complex scenarios of cooperative maneuvers between passenger cars and heavy vehicles in exceptional conditions, such as lane narrowing due to work in progress “.