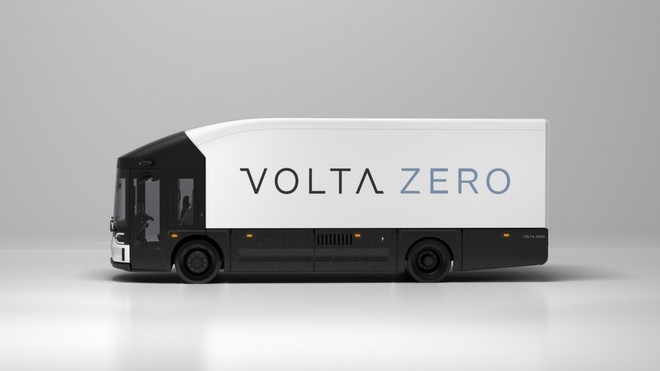 Volta Trucks , a company specializing in the production of fully electric vehicles and in the provision of services, has revealed what the final design will be of his Volta Zero. The latter will be the first vehicle 100% electric in the world used for heavy transport on wheels and was created specifically for the logistics in urban centers .

The final design of Volta Zero was developed by Astheimer Design of Warwick, UK, who equipped the electric truck with tapered shapes and a minimal design with a pronounced tail. Visually it is very reminiscent of the initial demonstration concept, modern and innovative in appearance and bodywork.

In the final version, ready for series production, the working cabin for the driver remains, with a central and lowered seat position to improve general visibility when traveling around the city. The load capacity was confirmed in the 7.5 variants, 12 And 18 tons. The latter will replace the previous version announced by the gross weight of 19 tons.

Despite the similarity to the concept, all body panels have been redesigned and updated in design while, to preserve the general design, so minimal, it was decided to remove the bar that housed the front lights . Now the passenger compartment has been embellished with the introduction of new materials and colors: the light leather of the demonstration vehicle has been replaced by a more practical anthracite gray color and the teak wood floors have given way to more resistant rubber coverings. ‘wear.

They are foreseen, to go into production, 25 prototypes which before leaving the factory will be tested with a complete and rigorous testing cycle, in the first months of 2022 . These tests will initially be carried out by Volta Trucks technicians and subsequently by customers who have requested the truck’s services, to ensure that the first vehicles in operation reach the required quality levels.

When Volta Zero was presented in September of 2020, some may have thought that its design and bodywork so revolutionary, unique in the world, had only a demonstration purpose and would never have been brought into production. We knew it wasn’t going to be easy but we were constantly motivated by the idea that a completely redesigned truck could improve the safety of the driver but also of the most vulnerable road users in urban centers where big trucks are driving. Working closely with the Astheimer design team and our technicians, we have created a modern, innovative and elegant design, exactly as an electric vehicle conceived from the ground up should be. The production-ready Volta Zero constitutes a paradigm shift in the safety and sustainability of commercial vehicles; I can’t wait for the vehicles to hit the road as early as next year with the launch of our rigorous testing program.

The startup promises that, thanks to the use of the vehicle, it could avoid the production of 1.2 million tons of CO2 by . Interested companies can already order the truck 100 % electric.

iOS 15.2 will allow you to leave your iCloud account as a “legacy” in case of death

Xiaomi, in 2024 its first electric could arrive